Raya and The Last Dragon is Disney’s latest film in its animation classics franchise. Following the footsteps of Moana in 2018, Raya and the Last Dragon tells the tale of the South East Asian warrior princess, Raya (Kelly Marie Tran), who must overcome the odds to find the last living dragon, Sisu (Awkwafina), and unite the various clans of the land in order to defeat an evil plague (a.k.a the Druun) and save her people.

Befitting a tale of courage and sacrifice to overcome evil, the film follows the predictable plot of most Disney-esque films. That is, the hero/heroine faces a great loss and must work together with her trusty pet sidekick and the friends she makes along the way to defeat an unstoppable foe, restore order and save the world. Sound familiar?

Though the film is thematically reminiscent of every other film of its kind, it does shed some much needed light into South East Asia, its people and its cultural heritage. Something that triggered a strong wave of tears in me throughout the film. Why? Most likely because my family and I moved from my home of Malaysia to the foreign land of New Zealand at a time where I was most vulnerable and developing my sense of identity as a young adolescent. That’s a story for another time though. Long story short, I miss Malaysia so darned much every single day. 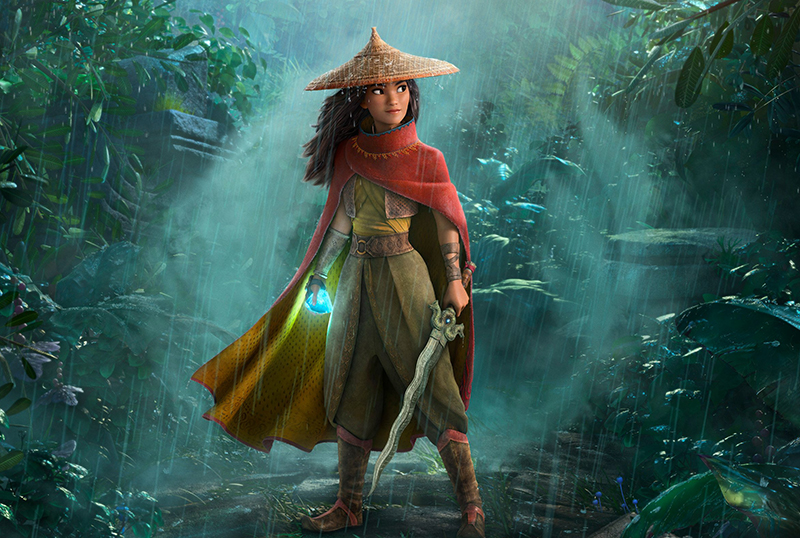 Right from the opening of the film, we are thrust into a bit of world history mixed in with a tale taken from what could be the old Chinese folklore of the Four Dragons. The stage is set with the land of Kumandra, a place where mystical dragons roamed free, bringing prosperity to the people who were united as one. This was short lived, however, due to the devastation brought upon by the Druun, a horrible plague which destroyed the land and turned many of the people and all the dragons into stone. All but one that is.

Just like in our world today, destruction and devastation ignites our survival instincts and what’s more human than the notion of ‘every man for himself’? This is one quality of mankind that many still abide by today, which I personally feel is an utter shame. The once united land of Kumandra becomes split with its five clans becoming wary of one another. That is, all but the land of Heart, where our heroine, Raya, hails from.

We learn that Heart, led by Chief Benja (Daniel Dae Kim), Raya’s father, is the most affluent of the clans and is determined to reunite the clans together to bring about Kumandra again, that is, the unification of all the people in the land in peace and harmony. Of course we all know where good intentions lead, especially when being selfish trumps being generous and loving to all. Watching the way in which the clans treated one another with contempt, added to the wave of sadness I felt. With everything happening in the world right now, particularly with the hate directed towards Asians, I couldn’t help but cry for mankind and felt such sadness that we as human beings aren’t more accepting of one another. After all, regardless of our outward colour and backgrounds, inside, we’re all exactly the same.

This kind of racism and lack of civility is very much rampant in South East Asia itself. Yes, Asians can also be racist and hateful of one another. In Asia, to be fair skinned and of a higher status or class in society is to be ‘successful’. Outward beauty and the amount of wealth you have determines how much ‘better’ you are than others. Many Malaysians, for example, often look down upon those from Thailand, Cambodia, Vietnam and other ‘poorer’ nations, despite being considered a third world nation too. Then there’s the jealousy over Singapore’s first world status and its wealth, despite Singapore once being part of Malaysia under the old name ‘Malaya’. Raya and the Last Dragon personifies this very kind of intolerance and jealousy through the five clans of Fang, Talon, Heart, Spine and Tail.

It’s not all negative representation in the film though. The film also depicts the one thing that brings South East Asians together: food. We South East Asians love our food and each country is known for their incredible delicacies. Setting aside differences and coming together through a shared meal is something that is very South East Asian and can be seen in the way Chief Benja invites the leaders of each clan to visit Heart and share a delicious meal together. Again, my homesickness kicked in watching Chief Benja cook and describe the main meal being served, which looked very much like the popular Thai dish, Tom Yum soup. I could almost taste the dish when watching it on screen.

Like with Moana, Raya and the Last Dragon breaks away from the damsel in distress and traditional ‘happily ever after’ stereotype. Instead, it depicts its female characters as strong leaders and warrior women, not in the way of the Amazons, who don’t live among men. No, these women, like Raya, Virana (Sandra Oh) Chief of the Fang clan, her daughter, Namaari (Gemma Chan) leader of the Fang warriors, and many others, are leaders of clans and army units that consist of both men and women. This notion of female leaders being capable of leading men is something rather new and unfortunately isn’t practiced as often in the real world, especially not in Asia. 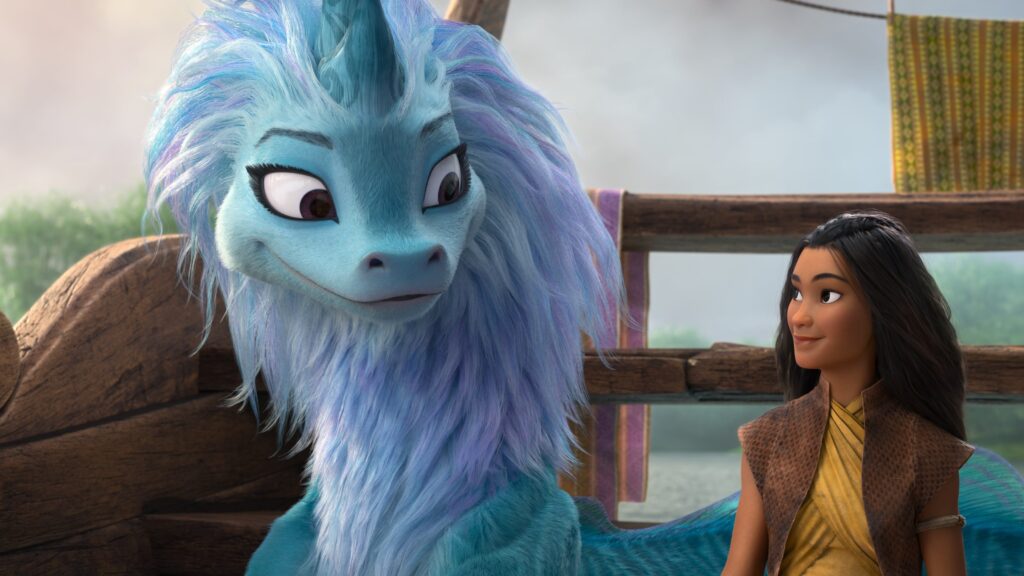 The phenomenal ‘girl power’ we see in the film isn’t always something we see in the Asia. Women in Asia are often discriminated against and looked down upon when compared with their male counterparts. Women typically do not rule, nor do they lead military units and the like, though in recent years there have been some exceptions. In various parts of South East Asia, women are still held back by the stereotype of being the housewife and caretaker in the family while men are the sole breadwinners. Though this is constantly being challenged in more well off countries like Malaysia, Singapore and parts of Indonesia, the Phillipines and the like, many in countries like Myanmar, Cambodia, Vietnam still hold dear to the idea that men are the providers.

It was a nice idea though and it was inspiring to see female characters play non-traditional roles.

Like almost all its predecessors, the power of friendship is highlighted in a way that leaves you with warmth and a feeling of so much love for your fellow living being. Raya and Sisu’s friendship was something to be admired. Where Raya was somewhat cold and lacked faith in humanity, Sisu was warm, welcoming and had a way about her that instantly made her likeable.

Both Kelly Marie Tran and Awkwafina played their roles spectacularly and truly personified what it means to rely on one another and balance each other’s personalities. Sisu, through the eyes of a dragon who loved mankind, warmed my heart and her trust in people was immensely beautiful. I did cry warm, happy tears at the way Sisu loved all of Earth’s creatures and her fascination over everything. In a world where we often take for granted the simple pleasures in life and where negative feelings, particularly towards others are rising at alarming rates, being reminded to love and accept others was something that touched my very core. Imagine if we all lived like Sisu, and trusted each other instinctively rather than jump to concern and being suspicious of one another first? What a beautiful and peaceful world we’d live in.

The personalities of all the characters within the film reminded me of people I know personally and the way in which the characters come together in support of one another for the greater good made me desperately long for a world that was united in harmony. To me, this reminder of what human beings are capable of really made Raya and The Last Dragon truly spectacular.

Speaking of characters and friendships, it wouldn’t be a Disney film without giving Raya a trusty animal sidekick. In this case, Raya’s companion was the ever adorable Tuk Tuk, a half pill bug, half armadillo creature. The on-the-nose joke of having Tuk Tuk not only be Raya’s sidekick but also her main form of transport was not lost on me. For those of you who have not been to Asia, Tuk Tuks (or auto-rickshaws) are what countries like Thailand and Cambodia call their main form of transportation. Of course we also see Spine’s Little Noi, another character in the film, have her own animal sidekicks in the form of three naughty little monkeys. Interestingly this reminded me of the Asian proverb of the Three Wise Monkeys, that is, “see no evil, hear no evil and speak no evil”.

This kind of humour was not the only one portrayed in the film. There were several laugh out loud moments, courtesy of Awkwafina’s intelligent humour and rapping that added much charm to the already wonderful film.

Visually, the film was spectacular with a portrayal of South East Asia’s finest, from its delicious food, variety of lands, captivating cultural attire, special weapons and so much more. Not only does the animation and colours inspire awe but the way the cultures are depicted (albeit not entirely accurately) is a fantastic start towards promoting the region to those who may not be familiar with it.

The one thing that was very different in this film compared to all others in the Disney ‘Princess’ series, however, was the fact that there were no songs in the film itself. Sure, there was instrumental music and accompanying melodies to keep the film moving forward, but that lack of a Disney musical number that audiences could get stuck in their heads and sing along to certainly was a tad jarring.

Overall, there’s so much I want to say about Raya and The Last Dragon but without spoiling the film, I must say that this is one film that I urge as many people to see. Though predictable in story, the many elements of the film that are different are so worth it. The relationships between characters, the possibility of people living as one, and of course the many inspirations taken from South East Asian culture is truly magnificent. Watching through the eyes of someone raised in the culture, I’m so glad to see the representation on screen. Though in many ways it could have been done better and more accurately, the fact that we have South East Asians now in the spotlight is a wonderful thing. Perhaps in future, Disney and other studios will utilise South East Asian actors too instead of Asians with star power. In saying that, I honestly don’t think anyone else could have played Raya and Sisu better.

Did I mention that I cried throughout this entire film? God I miss my home, my people and my food so much right now.