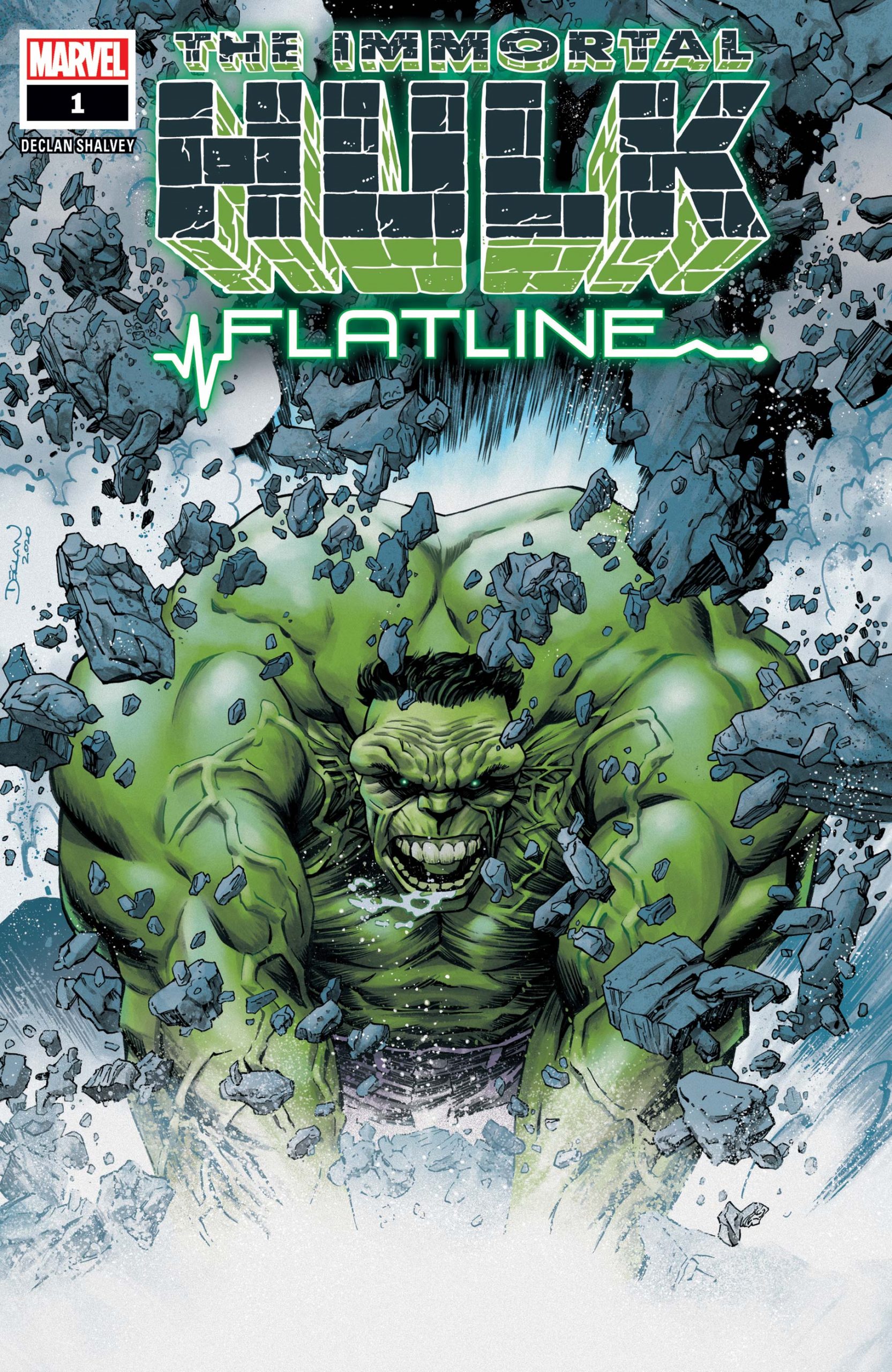 If you’re like me you’ve been blown away and completely satisfied with Al Ewing’s Immortal Hulk. The way he brings us back to the classic noir/horror roots of the Hulk and comics of the day. Immortal Hulk was my introduction to Al Ewing. It made such an impression I immediately sought out Al Ewing’s work much the same way I did with Hickman after reading House of X/Powers of X, or Zdarsky when I discovered his Daredevil run. I hold these three writers on a level of their own. So when I saw that the new Immortal Hulk Flatline was not Al Ewing, I was disappointed to say the least. I love Immortal Hulk though so I gave it a chance, I was un-disappointed right away.

This new writer for Immortal Hulk, Declan Shalvey also does the art for this Marvel one-shot. I’m always impressed when someone successfully writes and draws an entire comic, which isn’t always the case. Too many creators that try to do both often find out they really should have someone else write or draw. Every now and then we get someone who can do both, well. Frank Miller comes to mind (I love his stylized art and his writing, fagetaboutit.), although I’m not saying Shalvey is the next Miller, but he killed it on this one. Shalvey’s Hulk is certainly much less horrific and terrifying than Joe Bennet’s immortal giant. Flatline’s Hulk is mad brolic and always pissed off looking. Although we do get a peak at the morbid style of Immortal Hulk in a panel or two, this is a more charismatic rendering.

This story delves deep into the source of gamma and Bruce and Hulk’s relationship. Every night Hulk takes over and leaves Bruce waking up in the strangest places and Bruce is starting to suspect that The Notorious H.u.l.k. is doing this deliberately as some sort of message to him. Banner has certainly sent his share of messages to Hulk via bullets, hanging, drowning, burning and just about every other mode of suicide.

Dr. Banner has had it ruff lately. They say depression is anger turned inward, so what’s that do to someone who’s anger manifests as a giant green monster made of pure rage? A PHD many times over Bruce is somewhat over qualified for his current position as a dish washer at a small town diner. Unfortunately it’s one of the only cash paying gigs he can find while he’s on the run. Staying off the grid and under the radar isn’t as easy as one may assume. You can imagine the shock when he sees an old face who recognizes him and calls him “big man” like it’s an pet nickname. His old mentor professor Noolan is surprisingly still alive. Noolan has been following his story through media and the grapevine since she heard about his accident with gamma radiation. An accident which transformed him into the Incredible Hulk. She is here to make Bruce confront the pit of fury that controls his nights. The professor asks him what he does when he’s not Hulk to which he replies, “I wait.” His mentor admits she too waits, for her inevitable and approaching death. Banner can feel the gamma pulsing through her body, he knows she won’t live long.

There were…”side-effects” from Noolan’s exposure. Before Bruce can ask her about her health he realizes it’s almost HIS time and takes off. He can’t help but think the old bat was distracting him on purpose, did she want to see him change? After an altercation in the parking lot and punting a folded pick-up truck, the prof. tells Hulk she wants to chat. Hulk isn’t interested so gramma gamma smacks him one but good. Sends the big guy flying like a puny human. Those “side-effects” weren’t burning urination or diarrhea. Nana Noolan’s got juice! After she tosses the brute about some she makes it clear why she’s come. In her eyes Dr. Bruce Banner is capable of great things and his potential is being squandered. He was supposed to make the world a better place, not hide from it.

Grammy Gamma slams Hulk so hard into the earth that he feels what Bruce feels like, weak, puny, helpless. Hulk realizes for the first time why Banner is so afraid. Still angry as ever and seething with vengeance the behemoth smashes the old coot with all his might. “MORON. You can’t smash your way outta this.” As she tears the beast’s molecular structure apart she shows it just how much it needs Bruce Banner. Immortal Hulk thinks about the messages he’s been sending his alter-ego by leaving him to wake up buried in manure or dangling from a high place. Maybe if he changes first for the better Banner will follow and begin to live again.

Bruce awakens from the battle he can’t remember, as usual. Only this time he’s not butt nekid on a tree branch, he’s on the hospital roof next to a neatly folded outfit to wear. It seems the big guy wants him to win too. This could be the beginning of a beautiful friendship. Then he realizes he was left at this particular hospital because his mentor is here on her deathbed. Hulk wants him to say good bye to his old colleague and maybe learn a thing or two in the process. She always was a great teacher, thanks Noreen for one more lesson. Hulk and Banner both seem to witness the Green Door for the first time as ol’ Noolan crosses over. There’s one thing that keeps the man and the monster at odds. The same thing that keeps them together. Each other. The Gamma.

I’m going to assume this has been a prequel to Ewing’s Immortal Hulk. We learned how and why the relationship between Bruce and all of his alter-egos was developed. Why in Immortal Hulk the almost family-like connection between the different alters and Dr. Banner exists. Again, this is only an assumption as it’s not literally spelled out with any dates, times or authors notes. I make my guess based on the many plot-holes and questions that would arise if this weren’t a sort of prequel. It’s pretty clear as you read through that this takes place before Al’s Hulk begins.

In Flatline we saw a Hulk that was a lot less humble and cared less about his puny human personality. It took the frail old college professor to slap the taste outta Hulks mouth for him to realize they need each other. If you’ve been reading Immortal Hulk you see how connected Bruce has become to his multiple green personas. In past Hulk stories the connection is much less personal. Declan has shown us one reason why with installment. Each time the good doctor dies and the great Goliath resurrects it’s a chance for them to communicate and bond. Flatline #1 breaks this down for us in a hella-cool way by showing how they learned to do that, and how they began to move together towards the Green Door.