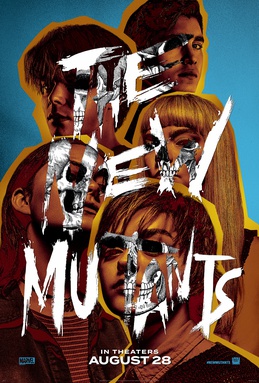 If you like your superhero movies as straight-up action-adventure, you may be a little disappointed, however, if you see every horror film that comes down the pike but usually skip the superhero fare, you might want to check this one out! One thing this film has in spades is atmosphere.

The characters backstories are nothing really new. You have the Jean Grey type whose powers are too strong and she must be destroyed in the character of Dani Moonstar (Hunt), complete with a subplot about her father dying while she was a young girl. The Colossus type in Illyana Rasputin (Taylor-Joy) in fact, she happens to be Colossus’s sister who controls the Soulsword. There is another Human Torch in Roberto De Costa (Zaga) the difference here is that he hasn’t got complete control of the power and when he gets excited, he starts to heat up and must cool down (I’m so tempted to make a Steve Miller Band joke here, but I’ll refrain). Sam Guthrie (Heaton) is the cannonball, who can propel himself through the air and becomes invulnerable while doing so. Finally, there is the Beast type, Rahne Sinclair, (Williams) whom Illyana calls a dog. Her power? She turns into a dog. Cecelia Reyes (Braga) passes as the Professor X type only she’s more detached from the students and clinical, caring more about the research than the actual people involved.

Instead of a school of learning, these mutants are kept at a hospital for observation. And as they get to know each other tensions flare. Reyes tries her best to keep these super-powered youths in check until they are ready to proceed into the real world and hopefully become X-Men one day. I don’t want to give away too much of the plot, suffice to say that they all create tensions among themselves and need to learn to work together in order to survive.

I must say I went into this film with low expectations. After the mediocre offering that was Fox’s last X-Men, which wasn’t even called X-Men, film I didn’t know what to expect from this. Another nameless villain with no real motivation that wants to either kill our heroes, take over the world or both another muhahahahahahahahaha type of villain that, in the 1930s, would have had a thick handlebar mustache to twirl. But this is different. The vibe here is pure horror film, it doesn’t feel like a superhero film at all. The villain is the one that you should trust the most and the true villain doesn’t come from the outside world it comes from within. Fear is a strong motivator for these young people to overcome and Dani’s fear threatens them all, much like Dr. Morbius in the old ‘50’s sci-fi film Forbidden Planet. Solid performances from the cast help us to suspend our disbelief in the fantastic situations they find themselves in and keep us captivated throughout. It’s not your run of the mill superhero film, it wasn’t meant to be ***1/2 stars from this reviewer.

Kevin Given has studied with “Longridge Writers Group” and “Writer’s Boot Camp” a speech/communications major from the University of Maine Presque-Isle/Orono sites. He has created the “Karl Vincent Vampire Hunter” franchise which includes novels and comic books. They can be found on amazon, Indyplanet and Kindle. For a limited time you can get digital copies of “Karl Vincent: Vampire hunter” #1 and “Files of Karl Vincent” #1 for free on Indyplanet. Kevin is producing the third novel and trade paperback in the series “Dracula Rising” (working title) and developing “Foul Blood” into comic book form.